Barton Malow Company (BMC) is the construction manager on a new 140,000 square foot expansion of Romeo High School. New facilities include a gym, theater, auditorium, kitchen, commons area, more classrooms, and renovations to the existing building. We spoke with Justin Becker, Project Engineer and VDC Engineer at BMC, about how VR has played a role in the project.

Why and How They Used VR:

What prompted you consider using virtual reality for this project?

This was our first time using VR in the K-12 education group, but VR has been used by BMC before. We’ve used VR to communicate with field crews on how to build complicated concrete pours or to help identify safety hazards in a controlled environment.  VR gives us the opportunity to “see the future” by immersing team members, owners and other stakeholders into a virtual environment to make decisions well before they impact field activities.

We wanted to use VR with this particular project because we had been testing out Prospect in the office with different models for a while and wanted to take it to the field to present the model to our client in a new and exciting fashion. Romeo High School was a perfect project because our relationship with the school district is excellent and we knew we would get helpful feedback from the administration.

What type of model did you have?

We had one large Revit model for the entire high school project that contained all of the different disciplines (around 140,000 square feet). To present it in VR, I broke up the model into four different chunks. Originally, I wanted to walk the client through the entire model at once, but there was so much ground to cover that breaking up the model was a good decision. The breaks not only ensured that each section launched in a matter of seconds, but they provided natural transitions in the meeting as we moved from space to space.

The Romeo High School Gym, captured from within Prospect. You can view this panorama in Scope using the share code 24KJ5W.

We were on-site for this presentation; I walked the the Romeo Community Schools team through our designs in an empty classroom at the high school. There, I was able to set up an HTC Vive and projected what the viewer was seeing via the classroom’s Smartboard. It was a great meeting space to use because we were immersed in the project and had ample space to walk around and interact with the model. I also think that using a Vive instead of the Oculus Rift positively contributed to the meeting. I really enjoy using the Oculus, but it has to be calibrated to each individual user’s height, which would have been difficult to do as we transitioned between users.

It’s also important to note that we were able to get up-and-running with VR in a few days. We purchased a Vive on Friday, I played around with it a bit on Saturday, and then performed the VR walkthrough on the following Tuesday. 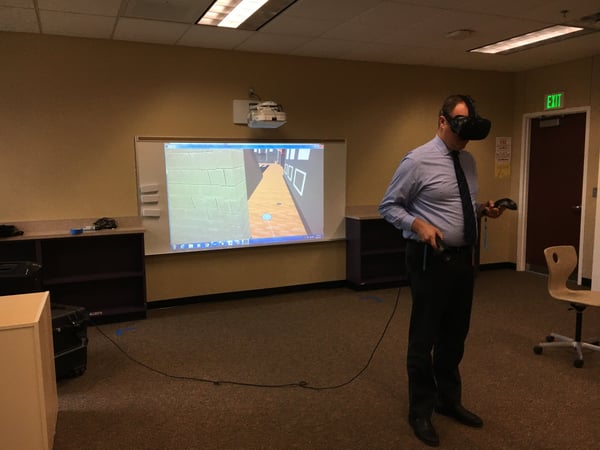 Our initial goal was to allow the school district to walk through the model and truly understand what the building will look and feel like.  We knew they would have valuable feedback architecturally and that is why we invited the project architect, Integrated Design Solutions, to sit in on the walk through.

Did VR meet or exceed that goal?

It exceeded our goal. The school district pointed out items that our project team had not noticed in our initial review sessions.  As a project team, we were able to hide certain elements of the model to get a better understanding of constructability issues.

How long did you spend in VR with them?

We spent about 2 hours in VR at this particular meeting – but they went by fast and were incredibly productive. We gathered invaluable feedback from their team. I was also able to show them different phases of the project and how certain areas had progressed over time.

Did you learn or discover anything through the use of VR?

This meeting was really interesting because it allowed the client to see the space from new perspectives. Safety is a major consideration in schools, and in VR they were able to access multiple different viewpoints that they otherwise wouldn’t be able to. For instance, it was important to be able to see the point of view of an administrator sitting behind the main desk/counter in the front office. In VR, the client was able to see if they could view the front door and a courtyard commons area where students would hang out. The Operations Manager was even able to point out areas where he wanted to install security cameras in the building. We’ll likely be going back into the model in VR soon to mark up these locations and take screenshots so that we can incorporate those camera locations into the original Revit model.

Did you experience any quantifiable gains from introducing VR to the project, such as saved time, money or travel?

Absolutely. The dollar amount is tough to nail down, but the team immediately noticed a few things that needed to be changed in VR, including incorrect logos and walls that were supposed to be glass but were modeled in different materials. Being able to make these corrections prior to construction is huge. It also served as an aid to understand the construction documents and 3D coordination.

Want to see more? Download the Scope app and enter the code 24KJ5W to view a panorama taken from Prospect.