Jack Donovan has been with IrisVR since the beginning - and a lot’s happened since his last Employee Spotlight in August 2014. Jack shares his thoughts on what’s changed at IrisVR over the past three years, what it’s been like to watch the company scale, and what he’s excited for in the coming months. 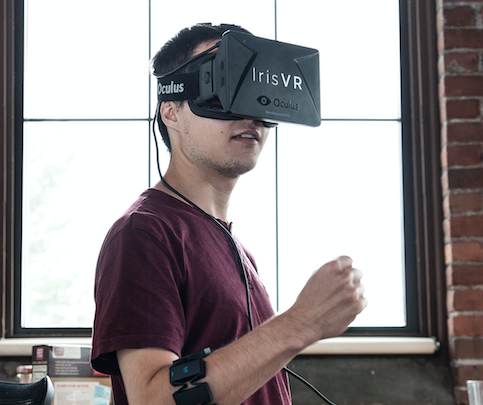 What is your position here at IrisVR?

I’m a software engineer on the game engine side, and I’m working primarily on our desktop software, Prospect. Prospect grew out of the early tech we started building when I joined in June 2014, but since then we’ve expanded our app offerings to include Scope, our mobile app.

What’s changed over the past three years and what has it been like watching the company scale?

So much has changed, it’s hard to pick where to begin. The office has evolved from a cozy corner in a co-working space in Vermont to a sizable office in New York City with plenty of workspace and conference rooms (which are essential, now that we’re a team of 20+ people).

The technology we’re working with has changed so much over the past three years, too. When I started at IrisVR, the only headset available to developers was the very first development kit of the Oculus Rift (DK1), and its relatively low resolution and refresh rate made it feel more like a preview of virtual reality than VR itself.

Since then, we’ve seen the advent of room-scale positional tracking in VR, controllers that enable us to see and use our hands to interact with virtual worlds, and HMDs with such high resolutions that pixels are barely perceptible; early VR displays had such a low resolution that the pixels were clearly visible, creating a blocky visual artifact dubbed the “screen door effect.” What’s most exciting is that even with so many improvements in a short three years, we’re still just in the beginning. I’m sure we’ll look back at what we’re working with now and see it as comically low-tech in a not-too-distant future.

My favorite part of this job is challenging preconceptions about what can and can’t be done in virtual reality, especially my own. Our software contains at least two or three features that I thought to be too difficult or even impossible at one point; VR development has historically been a strenuous and manual process because there are so many specifications to make and cases to consider, and automating at such a huge level can seem daunting at times.

Questioning the tenets of 3D development in light of the VR revolution keeps me excited and never too comfortable. It’s awesome to see others in the VR space redefining old understandings, too; Valve’s announcement last year of a new renderer that can process 18 lights in a single forward rendering pass—as opposed to the existing one-pass-per-light standard in forward rendering—struck me as a lesson that stale assumptions are the antithesis of progress.

What excites you the most about VR?

When I talk to anyone about VR, they’ve always got an idea for what they’d like to experience in it. Unfortunately, it usually remains just an idea; VR development is prohibitively difficult and nuanced, and even with the perfect vision of how something should look and feel in VR, it takes hundreds of hours of learning to understand each component that goes into a full experience.

IrisVR is exciting to me because it enables creators in spatial industries - architecture, construction, design, etc. - to experience their concepts in virtual reality without having to become VR developers themselves. Automation in general is interesting to me as a programmer, but automation at a scale that opens new doors for people is extremely exciting to be a part of.

What recent VR developments have caught your eye, and why?

I’m really interested in the recent developments towards making desktop VR wireless. Every headset out right now requires the user to constantly be tethered to their computers by the cables that connect the two, and the possibility of tripping over a cord or feeling a tug when you step too far are a substantial detriment to immersion.

This is a tough problem to solve because of the relative slowness of wireless transmission, and ironically it will only get tougher as headsets get better. Higher resolutions and faster refresh rates mean even more data to send wirelessly, and as our current methods of wireless transmission reach their bandwidth limits, we’ll need to find new ways to keep up with the immense amount of information contained in our virtual worlds.