Testing Prospect: Is it True to Scale?

In a previous blog post, we presented two experiments that sought to answer one question: is virtual reality true to scale? In this post, we’ll expand on that idea by demonstrating methods of measurement between VR and real-world objects in Prospect. Because our software is used by architects, construction firms, and other spatial designers, the accuracy of in-VR scale is critical to the success of a project.

Why Scale Matters in VR

When exploring a VR environment, users expect that their model is sized precisely to match how the space would feel in reality. It’s possible to determine if a hallway is too narrow or if a doorway is too low using VR, but this also means that inaccurate scale can lead to misinformed design decisions. We conducted this test to verify that Prospect presents spaces at a physically accurate scale and to guarantee that you can make precise spatial decisions using a well calibrated VR headset.

Room Calibration Aligns the Virtual to the Real

Positional tracking is a big part of the magic behind high quality VR experiences. As the headset moves through space, the view updates multiple times per second to represent that movement. This makes the experience in an HTC Vive or Oculus Rift feel much more realistic than that of a mobile VR solution such as Google’s Cardboard and Daydream headsets or Samsung’s Gear VR (mobile VR devices only track rotation, not position).

The Vive and Rift use different methods for tracking position, but they are both similar in that they use external powered devices to determine where the headset is in space. These tracking devices have a field of view, and tracking quality is usually better when multiple trackers have vision of a single tracked object.

To determine relative distance between the virtual and real worlds, especially the distance to the floor, the Rift and Vive leverage a user-defined room calibration. If this calibration is wrong then the virtual world may not align with the real world. For example, when the worlds are misaligned, a headset or controller placed on the ground in the real world will appear to float or sink through the ground in VR.  In the picture below the VR ground plane is about an inch too high. If a measurement is taken with a ruler from the real ground to a VR shelf, it will be off by an inch. It is important to run room calibration if you believe there is a chance a base station or sensor has moved since the last calibration, or if you find the virtual floor is not where it should be. 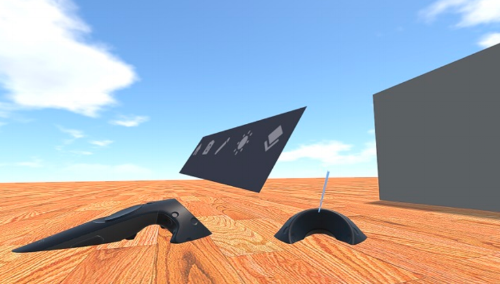 For this test we use Sketchup and Revit to create 3D models of boxes of known sizes. Our expectation is that the size of the box in VR should match the real world. This can be verified by placing a tracked motion controller at either end of the box and measuring the distance between the controllers. 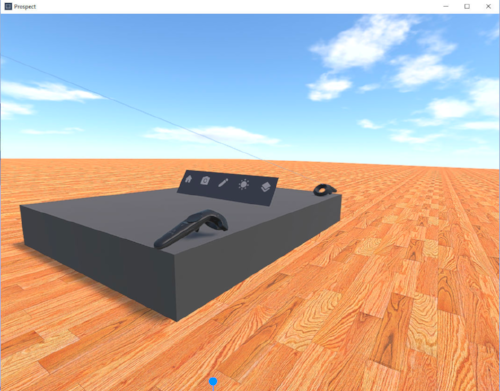 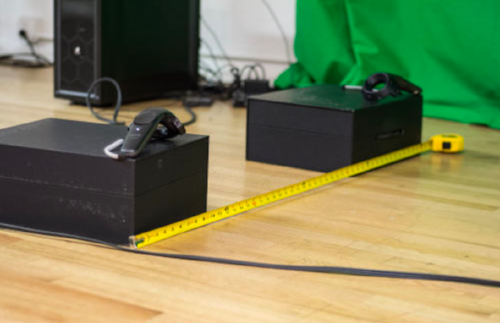 In our test, the Vive base stations pointed down towards the center of the tracking area from opposite corners. The Rift sensors for the headset and Oculus Touch were placed on a table looking out parallel to the ground and each other. Since the Vive’s base stations “view” the floor from above, they generally have better tracking of the floor than the Rift. The Rift may have blind spots, especially as you move close to the sensors. For this reason we are able to get good results in measuring distance with the Vive close to the ground whereas with the Rift we had to place the Touch controllers higher up or lower the sensors.

In our tests, we found scale in Prospect to be generally accurate. That said, we found some differences between the Vive and Rift headsets in cases when the tracking sensors do not have a full view of the controllers.

In an ideal tracking configuration, scale in the center of the tracking space generally deviates less than 0.7cm or ⅛ of an inch. This was measured with a 1m box and a 4 ft. box. With a 2m box it is difficult to keep both controllers within the best tracking area in the center of the space and the error increases to as much as 2cm. 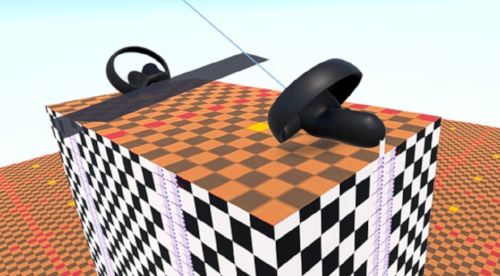 The Vive and the Rift use different methods for determining the position of the floor. The Vive uses the position of controllers that are placed on the floor during room calibration to determine floor height, while the Rift asks the user to enter their height and tracks a controller placed at eye level. It seems that the Vive’s floor height may drift noticeably from session to session; this may be the result of the base station’s position changing slightly. With both headsets it is important to run room calibration if there is any question that if the sensors or base stations have moved.

In conclusion, our tests show that it is possible to have a physically accurate VR experience in Prospect. For the most accurate experience, it is important to pay close attention to your headset and tracker configuration during room calibration. The Vive will give you better accuracy out of the box compared to the Rift though the Rift is quicker to set up.

For more information on setting up the Oculus Rift or HTC Vive, see these guides or feel free to reach out to our team: