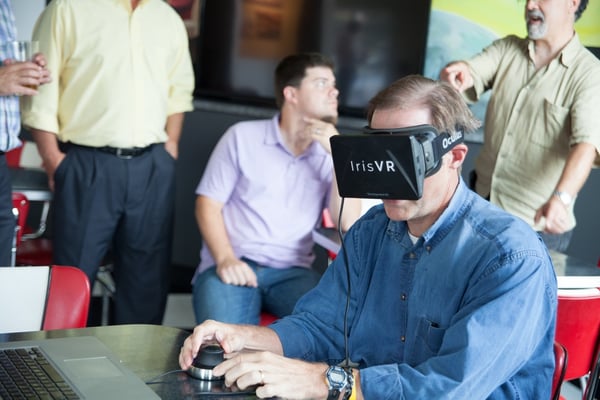 On the top floor of a beautifully renovated old mill building building in Cambridge, the mere mention of the term virtual reality conjures up images of devices more closely resembling Darth Vader’s helmet than a pair of ski goggles or sunglasses in the minds of most of the architects in the room. The skeptical faces of those around the conference table increasingly show gleams of intrigue as my colleague Shane plugs the Oculus Rift into his computer and pulls up a model in SketchUp or Revit. Without too much introduction, he shows off the model on the 2D screen and then invites someone to sit in the “driver’s seat.” Immediately after donning the pre-release virtual reality headset hardware, the first tester reaches out to touch one of the walls, points at a rafter, a skylight, and remarks about all of the interesting architectural features overhead. I love witnessing this reaction to the experience because it means that the user is fully immersed, walking through a specially realistic representation of the digital model that they just saw on screen. This is how most of our presentations go, to industry professionals and friends alike, at IrisVR. There is nothing quite like stepping out of reality and into a world that only existed in your mind or on a screen moments prior. One architect even stood up after trying a demonstration of the IrisVR beta software and placed his hand over his heart stating that he felt as though he had just walked into a building that he designed for the first time. In the case of this passionate architect and designer, the joy of experiencing his own creation made him feel “butterflies in his stomach.” I was quick to joke that virtual reality sometimes causes motion sickness, especially when using today’s early hardware models that have not yet been perfected. At the same time, the current technology is good enough to show the promise of virtual reality (VR) in the not-so-distant future.

Virtual reality certainly has its flaws and the bulky, expensive helmets of 1990’s VR, combined with their inability to provide an immersive experience without causing cyber sickness (also known as sim-sickness), ultimately made VR inaccessible as a toy or a tool meant for widespread use. Bulky goggles and gloves that fail to deliver any full sense of immersion are not an adequate platform for game development or the creation of commercial VR software. Who wants to develop for hardware without promise? The virtual reality of the 90’s was just that - always virtual and never reality.

Learning from the past, a number of stars must align to bring the SiFi dreams of last century to fruition. Virtual reality can’t make people sick - that detracts from the experience. It also needs to be good enough at a low enough price point so that the potential market size is vast. Good hardware and a promising market size will provide a stable platform that developers can bet on, creating a large pool of diverse content right from the start. Finally, in 2014, the first couple of puzzle pieces have fallen into place.

First and foremost, many competing (and collaborating) companies have developed robust technology that can provide the necessary quality of experience. The best portable headset that I have tried to date has been a hardware hack by the gaming platform company, Valve. I had the opportunity to talk with some of Valve’s hardware developers at the Boston VR Jam in June. With no plans of their own to release hardware, Valve is putting a significant amount of research and development into virtual reality and sharing their technological breakthroughs with hardware manufacturers and software developers in an effort to make the platform a success. While the Oculus Rift DK1 makes me feel dizzy and disoriented after about 15 minutes of use, I played with Valve’s headset without the slightest hint of nausea. Fluid positional and motion tracking, a high resolution display, good optics, and low latency made me feel what Oculus refers to as “presence” for the first time in a virtual space. I can’t describe how incredible it was to be standing in a virtual room in front of a virtual robot and to be able to see the components of its construction in detail, right down to the fasteners, screws and bolts that virtually held it all together. Successful portable virtual reality hardware has evolved - the technology exists today.

While Oculus sold 60k units of their first Rift developer kit, it was far from perfect and lightyears behind the Valve demo that I tried in Boston. Importantly, however, it hinted at the future of amazing VR hardware at a low price point. When Oculus incorporates all of the features of the Valve hardware - target features that they have explicitly stated they are going to build into the eventual consumer release - their sub-$1000 hardware unit will make high performance, immersive VR accessible to the masses. The DK2 is a already a step in the right direction and the consumer release promises to be even better. If you can afford a video game console, you will be able to afford an Oculus Rift and you will have access to a full VR experience.

With robust, affordable hardware in the works from Oculus, Microsoft, Sony, NVIDIA, and others, developers have recognized virtual reality HMD’s as the next big hardware platform. John Carmack, Cliff Bleszinski, and Mark Zuckerburg seem to be convinced, just to name a few of the heavy-hitters. Facebook recently purchased Oculus for $2b and Mark himself has expressed his enthusiasm about the creation of rich content. Games like the much-hyped Eve Valkyrie are being produced exclusively for virtual reality and movie producers are banking on its future applications in cinema. At the same time, VR is not limited to the entertainment industry. Even now, before a consumer hardware release from Oculus or its competitors, accessible VR is revolutionizing healthcare. Here at IrisVR, we hope to enable engineers, designers, and architects to inhabit their designs and more effectively communicate their 3D ideas. The gold rush to create content is happening and the field is wide open (for now).

The consumer electronics of the near future will allow us to interact with our environment in a more meaningful way. Up until now, electronics display data in 2D. As human beings, we exist in 3D space and with the rise of wearable technology and products like Google Tango, hardware is increasingly becoming integrated into our daily lives; 3D is the next frontier in the evolution of digital devices. As evidenced by the activity on Oculus Share, Reddit, and the hype in the tech industry, plentiful content has already been created for a healthy future of virtual reality. The time is now for 3D tech and developers are already jumping at the chance to build on emerging platforms. The pieces are coming together for an exciting year of virtual reality breakthroughs in the coming months and into 2015. The future holds the evolution of a powerful design tool and I am thrilled to have the opportunity to be a part of its development.