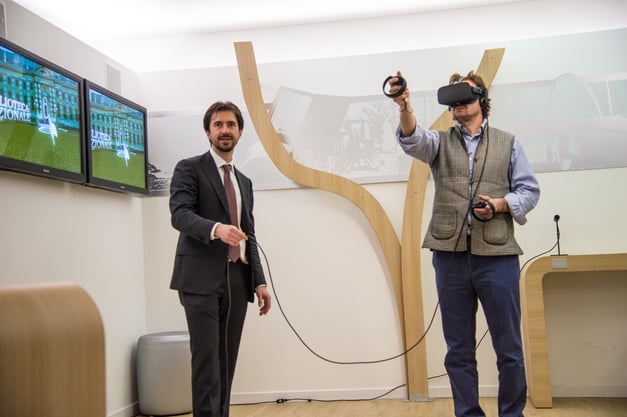 Post-occupancy evaluations are fairly standard, the idea being that designers can take what they learn from any faults or shortcomings, to improve for the future. While there is certainly merit to gathering this type of feedback, it also doesn’t help us get it right the first time, nor is it the most direct approach for prioritizing human centered design principles. Moving the discoveries, interaction, feedback, and walkthroughs from stakeholders further upstream helps catch errors and get insight earlier during design development. But, until recent years, pre-occupancy evaluations were easier said than done and posed significant costs.

Most often, pre-occupancy evaluations take the form of full scale mockups and build outs that require materials, labor, time, space, and in-person visits - all of which come at a premium, produce waste, and are far less achievable now with remote workforces. Iterating or A/B testing exponentially increases costs, which impact the bottom line.

When working virtually, many of these real-world constraints melt away. BIM + VR makes pre-occupancy evaluations possible in ways never before realized, by using 3D models to visualize and experience buildings, long before breaking ground on a project. Immersing these stakeholders in a true-to-scale virtual space greatly improves the likelihood of catching inefficiencies, while working quickly through options and iterations. This will help gain confident buy-in across teams and stakeholders and provide invaluable insight early on in design development. Before the construction phases ever begin, teams see significant efficiency gains and cost savings in terms of reduced rework and faster turnaround time.

Today, with modern technology and tools, AEC teams can instantly and iteratively host pre-occupancy evaluations in VR, directly from the models being constructed for each phase of design & development  - from fast and loose blocking and space planning in SketchUp, to polished BIM documentation in Revit, to fully federated models in Navisworks.

There is a unique opportunity to change the conversation around project delivery, and set a new enterprise standard for the experience AEC professionals can provide to their clients. Stay tuned for future posts on how the advantages of BIM + VR provide a clear solution to designing better and faster, while increasing ROI, reducing RFIs, and pioneering a better way forward with sustainability and human centered design in mind.

Today, AEC teams make a modern technology stack work for them - driving value and efficiency -  allowing lean teams to get the job done better, faster, and with less waste and resources than ever before. The result is not only a better experience, but a better overall end result.

Are your gears already turning? Learn how to apply this to a project already in motion by talking to one of our pre-occupancy tech experts.