SHoP Architects has designed many well-known buildings, such as Brooklyn's Barclays Center.

SHoP Architects  of New York City was founded twenty years ago to design buildings and environments that improve the quality of public life. To do so, they craft spaces that precisely suit their functions using emerging technologies.

One of SHoP’s primary goals was to implement VR to supplement traditional design tools, like drawings and 3D models. With IrisVR Prospect, they did so — allowing them to save resources, democratize the design process, and empower everyone involved in a project to make decisions faster.

What trends in your industry drove the need to use VR?

SHoP has always worked to ameliorate the inherent limitations of our industry. Chief among these is that architecture is a decidedly 3D practice — we make real, physical, material interventions in the actual world — but the traditional deliverables for our industry, the instruction sets for getting things built, have always been heavily constrained to two dimensions.

So, just as we pushed early to adopt and integrate 3D modeling and rendered visualization into our workflow, we also became very interested in the possibilities of VR as an everyday design tool.

We’ve always known that this technology would eventually be the mechanism to close the circle in an all-digital process and that it would allow for us to design more meaningfully and communicate the effects of those designs — internally, among our teams, but also for clients and other people who would not normally navigate a 3D model. Technology like Prospect explodes that last barrier to entry.

What were you looking for in a VR software solution?

We were looking for something where we could actively explore design and iterate options: a tool that could help us engage through VR at the earliest possible stage in the design process and then scale up all the way through to that final, polished communication with clients. It was never primarily about super high-quality immersive renders. We wanted something optimized for immersing designers in the creative process.

What made Prospect stand out over other VR solutions that you researched?

IrisVR seemed to be about collaboration. We’d been working with IrisVR from a very early stage, so I think we had a good idea of where we wanted to go with our roadmap and our vision of the industry. We saw that Prospect is about design first, and less about only communicating a final finished product to someone.

Implementing VR across the organization

How did you implement Prospect into your workflow?

We just did it! We had a very early version of the tech, and we just put people right in it. We put the first rig in a prominent spot in the office, and it demanded attention on its own. I think the narrative of SHoP, the culture here, is such that there’s no way that VR’s not going to catch on. Once people had their hands on it, every project review just went right into VR, without any fuss or ceremonial transition. The irony is that virtual reality demands a physical space, so right off the bat, the “VR cave” became a center of action in the office. Now it’s just part of our workflow, and we have set-ups deployed all over the office. 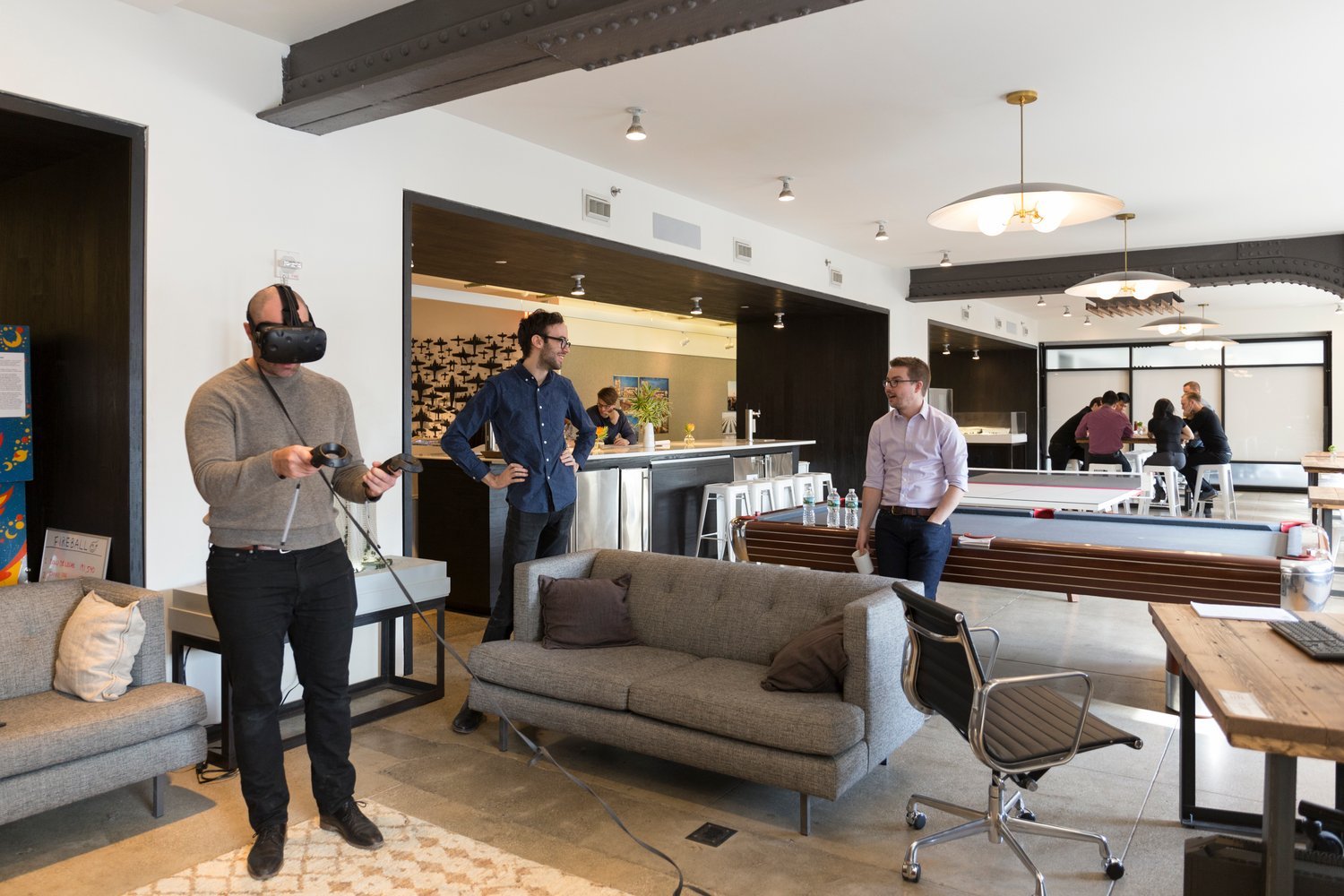 One of the VR caves at SHoP's New York office. Image courtesy of SHoP.

What steps did you take to produce the virtual reality content?

We use Rhino, mostly. 99% of what we review in Prospect comes out of Rhino.

We have several Vives and Oculus Rifts. In our main space, we use two Vives. It’s a big space that you can walk around freely in with fixed sensors set up, best for big groups and client use. We also have a bunch of desk and traveling setups running off laptops. Whenever we can — in the main space and where it’s possible throughout the studio or on the road — we set up a big screen, so the rest of a group can see what’s happening as one or more people are in the model.

How has Prospect helped your team since implementation?

Prospect has significantly compressed time spent in design review, and it’s made design review more meaningful. The number-one value so far is that it seems to empower people to make design decisions faster. You can’t hide scale in a simulation, you can't misunderstand a space. So, designers can get in there and say with great confidence, “It’s A, not B,” or, “I like this one, not that one.” It’s helped communications with clients, too. When you can get all the barriers to understanding a space out of the way, it just really expedites communication and erases any lingering doubt. It follows that we can also take bigger risks now with some clients, proposing a complex space or effect, knowing that they'll have a chance to really see and understand exactly what we're proposing.

We have some use cases that involve ergonomics and usability—we’ve used VR to test “Can someone reach that?”, or even how certain materials will act in certain applications (for example, ninja-proofing: can someone climb that wall?). Because we get involved in many projects as far as the delivery of component fabrication information, we’re also checking installation feasibility now in VR.

We did this with some of the components in our Botswana Innovation Hub project, answering questions like, “Standing on this floor, can you reach and make that connection?”. That's been amazing because it only involves someone going into the VR environment and literally reaching. For another project, the security advisor went through a series of spaces to experience what the security cameras would see from different angles, and to help identify any blind spots. We're seeing more and more that consultants can use this tool for whatever their specialty may be, security or safety or codes. Now, suddenly, they’re walking through the building and it’s all more real to them.

How long do you spend in VR with clients?

It depends on the client. One time, a client went in for the first time and just stayed there, wandering all over, checking out every corner of the space, for like half an hour. In most cases now we find it works best in bursts of 5 to 10 minutes. We usually set it up so we're sort of passing a headset around and different people jump in and out while everyone else watches on the screens. That is a very effective platform for generating useful feedback about the progress of a design.

Did it improve your relationship with clients?

Yes, definitely. Our philosophy has always been that anything that demystifies the process of architecture is a net positive for working with clients. We want them to understand exactly what we're thinking and doing and making. So being able to stand in a simulated space together and move around and point things out, that is the ultimate demystification. 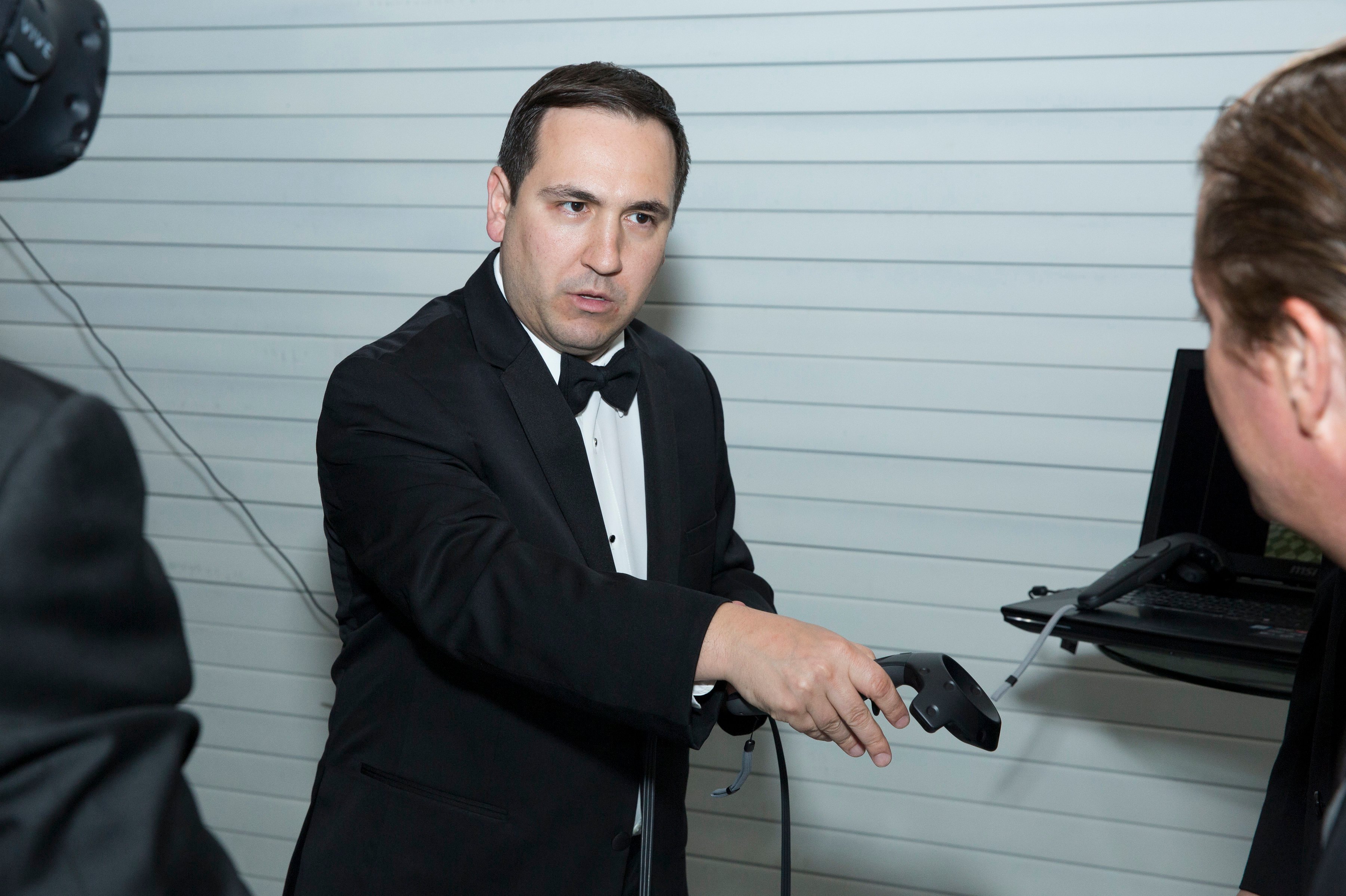 Virtual reality was part of SHoP's appearance at the Intrepid Salute to Freedom gala. Image courtesy of SHoP.

Has it led to additional commissions from clients?

For sure. It’s so aligned with our story and our DNA here, it’s very complementary to a lot of what we're always trying to get across about how we see architecture and approach designing it. We’ve been very successful so far integrating VR into our process for all types of clients—public, private, high-profile, first-timers. Every type of client, every type of program, VR has a place in the process.

Get rid of drawings! That is our never-ending cry: get rid of drawings, save the world! We do our design work in a VR environment now. People pull the information they need and do their work real-time right in VR. That's a huge step toward the ultimate goal: to stay in the 3D environment all the way from first conceptual sketches through development, and then right out into the job site or the factory floor for component manufacturing. I think this technology, combined with AR, is going to change the game forever on the design end.

The next challenge, the one we need to address right now, is that for permitting and construction you still extract 2D. You basically have to take a step backward in comprehensibility to make your design visible to those audiences. This is a transitional state—it's going to take a lot of work across all the associated fields, including law and government, but eventually we'll get to a place where permits will be issued off model-based information and AR will guide construction in the field.