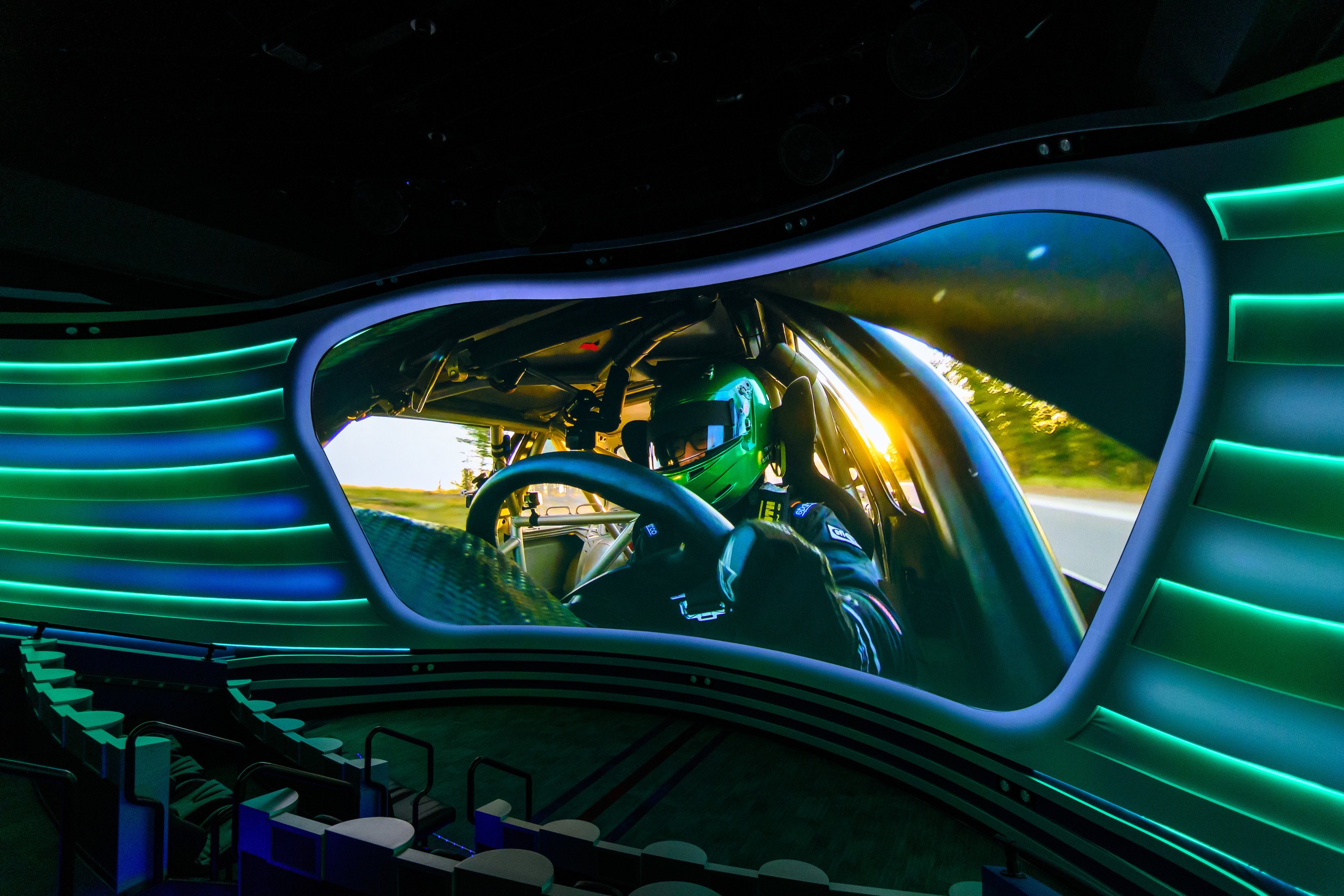 “Within five minutes [of using VR], we caught what could have been a $20K error.”

When Henry Ford Museum of American Innovation tapped BRC Imagination Arts to create an emotional centerpiece experience for their newest exhibition, Driven to Win: Racing in America presented by General Motors, the central challenge was delivering on a short, nine-month timeline. Using Prospect by IrisVR, the BRC team was not only able to streamline its design and review process, but also design key aspects of the custom-built theater, like the emotional look and feel and the ergonomics of the space. VR was a crucial tool that helped BRC craft an immersive brand experience on a very tight turnaround.

BRC's virtual model of the custom-built theater in Prospect

BRC Imagination Arts had a tall order. The company was tapped by their long-time partner, Henry Ford Museum of American Innovation, to help them and a suite of other collaborators create a new exhibit about racing in the United States. Specifically, BRC was tasked with creating the emotional centerpiece experience for the exhibition that would bring Henry Ford Museum of American Innovation’s incredible collection to life through immersive storytelling, with a focus on innovation and the passionate people of racing—in only nine short months.

Working within such a compressed timeline presented several other problems, such as the need to streamline the review and approval process. BRC also needed a faster way to move on design changes, and they needed a way to get the feel of the space they were designing without having time to create full-scale mockups.

BRC is a full-service, strategy, design and production company. For 40 years, they’ve been helping their clients translate brand and cultural stories into transformative human experiences. Their work helps clients build more meaningful, enduring relationships with audiences around the globe. As part of their long partnership with Henry Ford Museum of American Innovation, BRC previously created the multi-media experience, “Manufacturing Innovation,” for the Ford Rouge Factory Tour. One of the Creative Directors spearheading this latest project for Henry Ford Museum of American Innovation was BRC’s Edward Hodge. 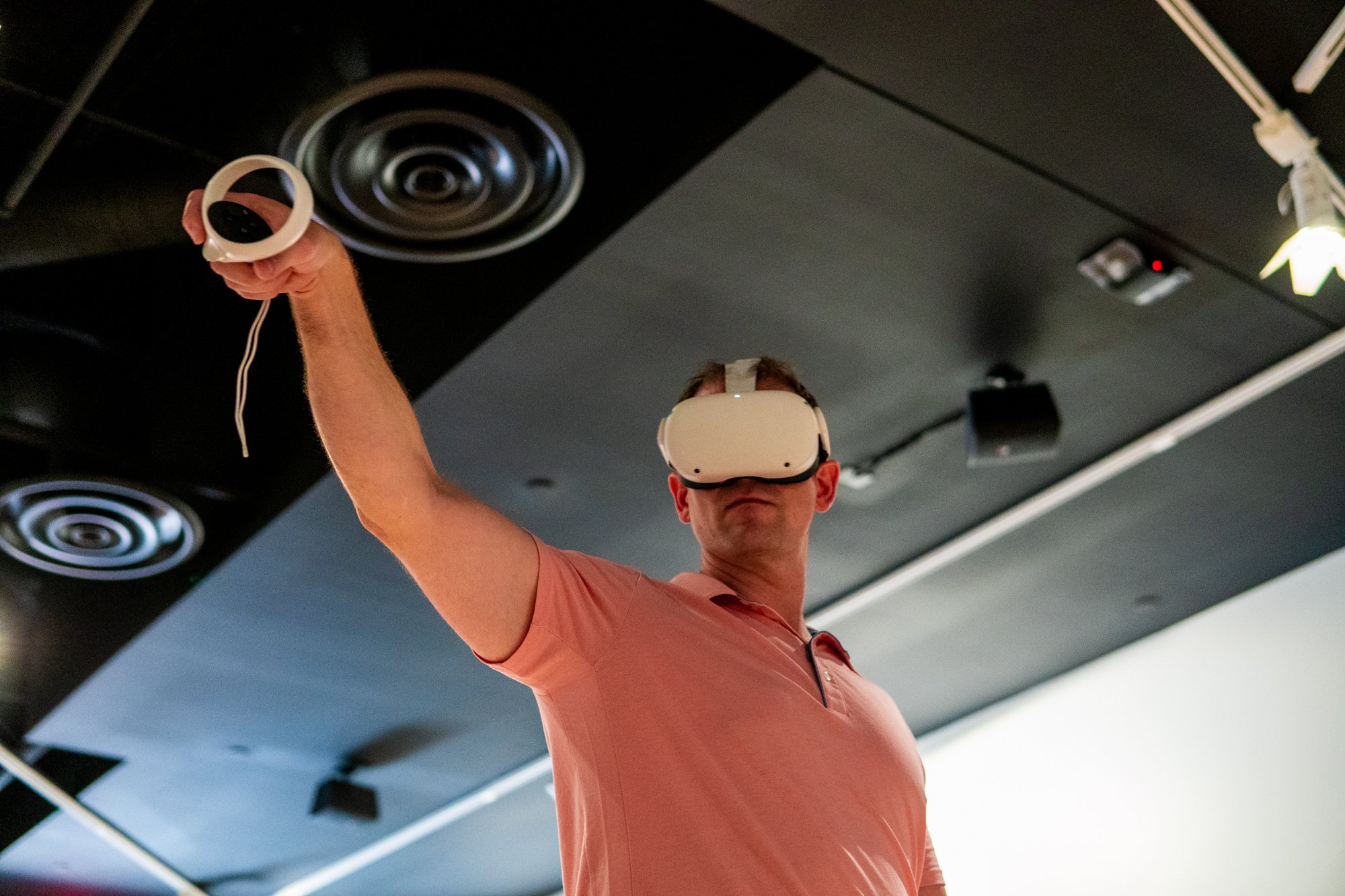 Prospect by IrisVR, is a leading platform for immersive design review and coordination. Prospect is used by BIM and VDC teams, design firms, and engineers who coordinate 3D models and implement design and construction processes.

While the nine-month timeframe and the resulting need to compress its normal design and review process were perhaps the most obvious challenges for BRC, there were several other considerations that caused Edward and his team to lean on Prospect by IrisVR. The team began with a creative brief that described the feel and thrill of being at auto races in America and hearing the personal stories of the drivers and the community. The team also knew they needed to work within an existing cylindrical-shaped room. “We had this challenge then of not designing a space from scratch as we might usually do, but seeing how we could fit a show into that space,” Edward said.

The BRC team came up with the idea of following five different storylines with different races and a focus on the drivers, the people in the pit, and the family and community who support them. The team needed to shoot video footage all across America. They hit upon the idea of the audience being inside a helmet with a panoramic view just like the drivers have, but with no time to create full-scale mockups, they had to figure out some other way to identify critical design elements of the unique space. They needed to decide the primary and secondary images that audiences would see from any row in the theater — again, without sufficient time for the typical iterative design process and full-scale modeling. They needed their media to follow Academy of Motion Pictures Arts and Sciences standards for displaying image and sound. They also wanted the room to transform through the use of light, projection, sound, and pacing. There was only one solution that allowed for such rapid design iteration: VR collaboration. 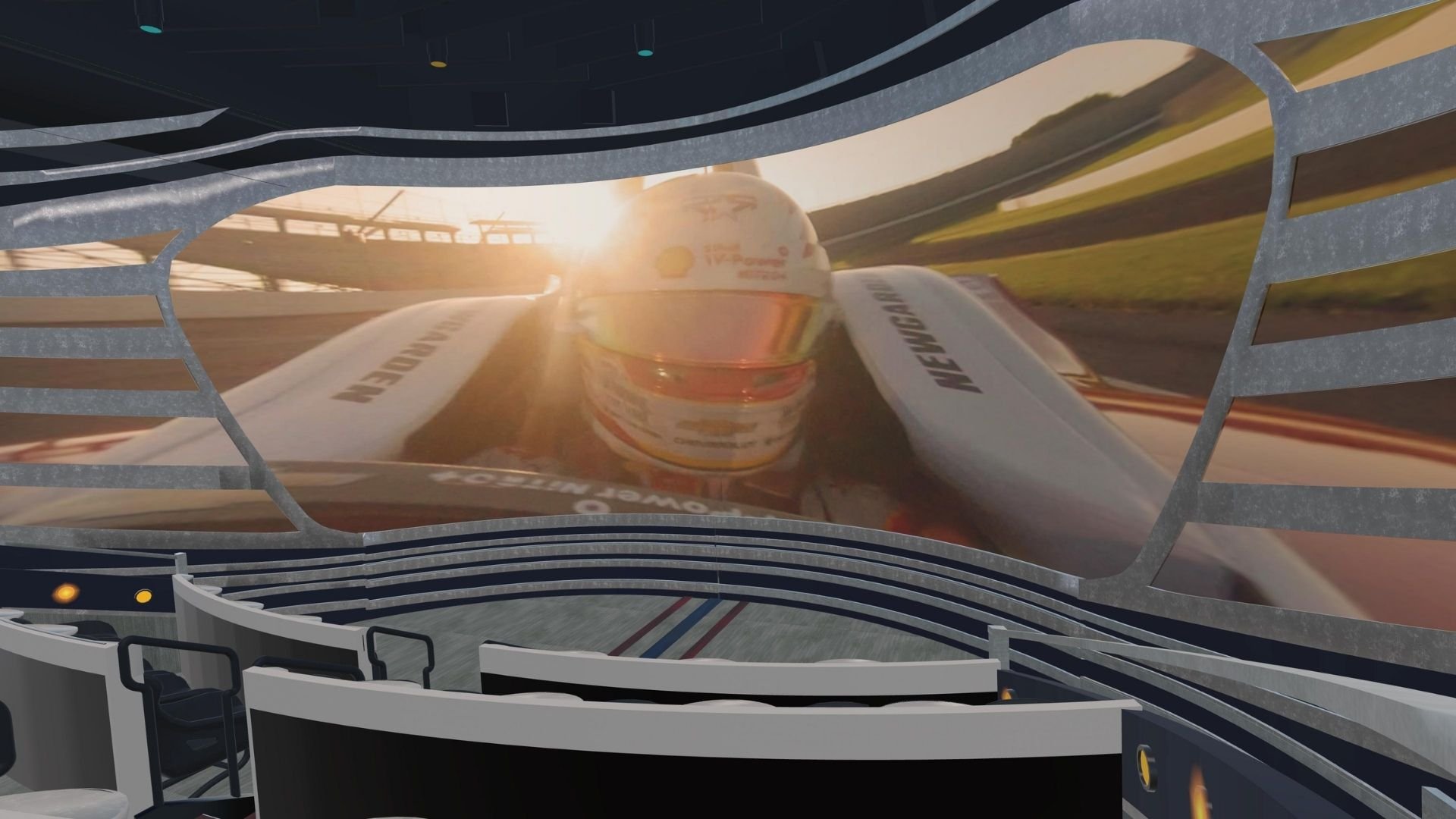 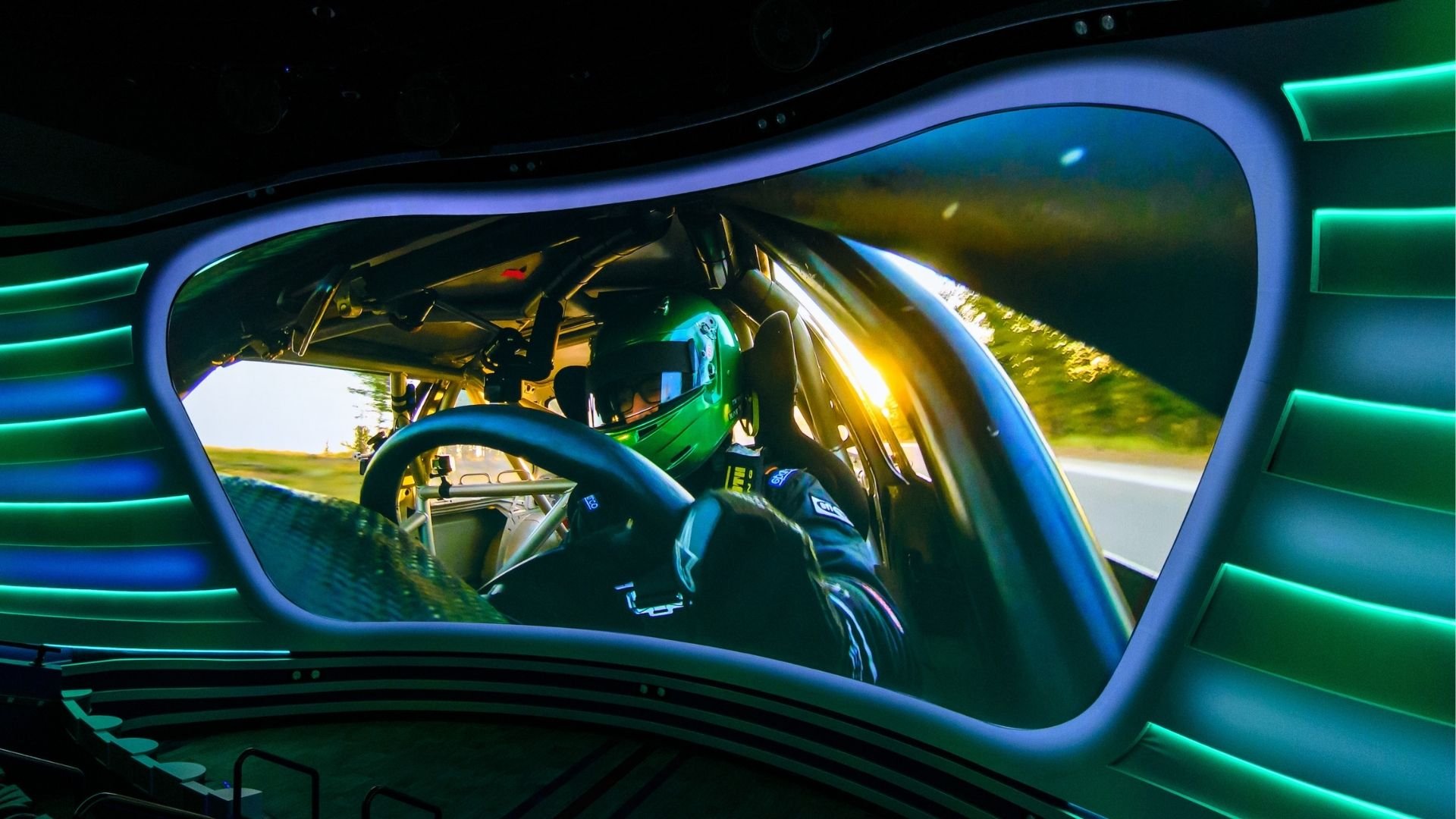 The Solution: Collaborating in Virtual Reality

Collaborating in VR using Prospect throughout the team’s design process proved to be helpful in several ways. First, the team experienced “instant gratification” on design changes, receiving feedback and approvals more quickly. “We were committing to a base design we were going to open just nine months later,” Edward explained. “The first thing we did was we took a concept model and uploaded it into VR. We were then able to sit in it and make notes. In a day we made three or four big changes, and that was it. We knew enough to be able to say, ‘what we are promising, we can produce.’” Working in VR streamlined the design and review process, allowing the team to create smaller mockups and have fewer meetings.

Designing the Look and Feel of the Space

Using Prospect also helped the team design the look and feel of the room. “We want our guests to have an emotional connection and reaction to the spaces we’re creating,” Edward said. “In VR you can quickly see what needs to be changed.” It allowed the team to mock up certain elements and design conditions together to understand them. It was also helpful in understanding the viewshed of the audience from anywhere in the room, which helped the team decide how deep and how high the seating should be and how large the central image had to be.

“What it feels like in VR is very close to how it feels in the room,” Edward said. “It surprises us all the time, when we actually go into a room after looking at plans for months, how close it is. And that’s fantastic because it means we can trust the tools we’re using. We tend to make really big, can’t-ever-go-back choices in VR because we know it’s one-to-one, which is very unique to VR.” 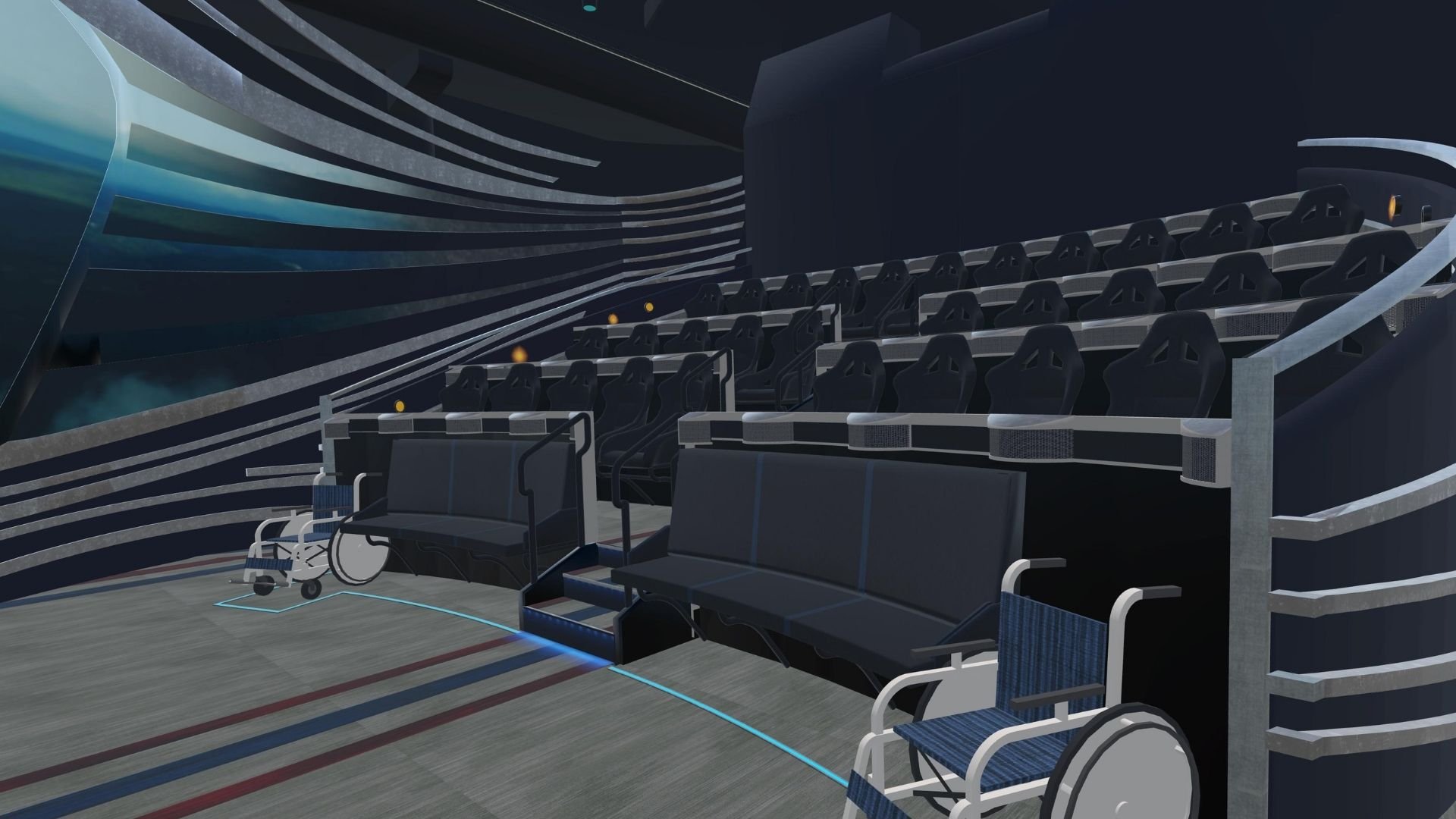 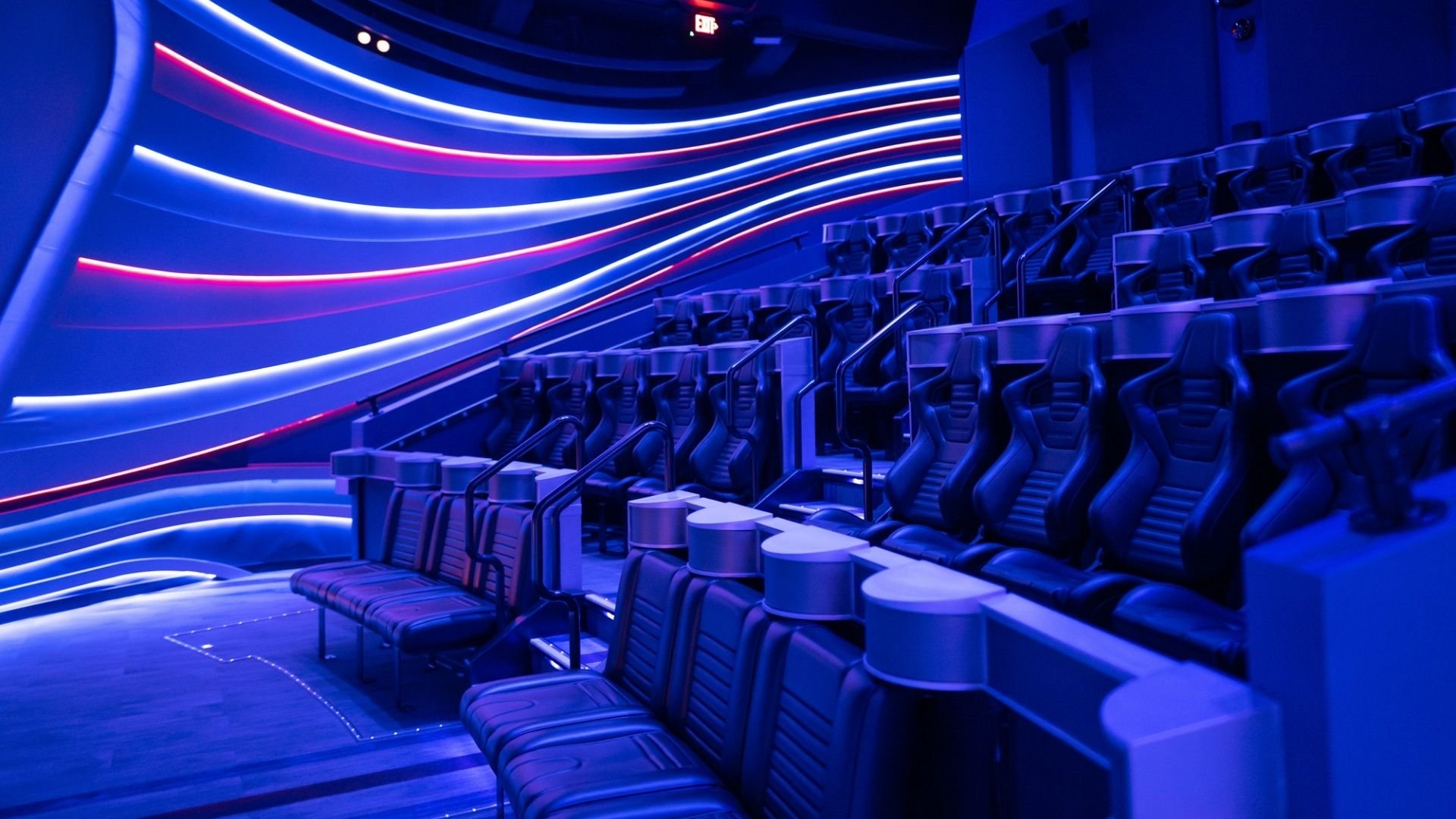 Designing the Ergonomics of the Space

Finally, using VR allowed Edward and his team to design the ergonomics of the space. “It’s really important that our guests feel at home and comfortable, and we don’t want to build spaces that are difficult to navigate,” Edward said. BRC uses “visual magnets” to help people move easily through the theater experience, things like lighting to naturally pull guests to the next space. “We used VR to verify ergonomics and our visual magnets along the way so we didn’t need signage,” he said. Working in Prospect, Edward’s team was also able to identify and correct what could have been a costly mistake. “We thought we were done and everything was good to deliver. We converted our file and took a “fake seat” on the balcony, and we noticed there was zero visibility of the side screens,” Edward said. “Within five minutes, we caught what could have been a $20K error.” 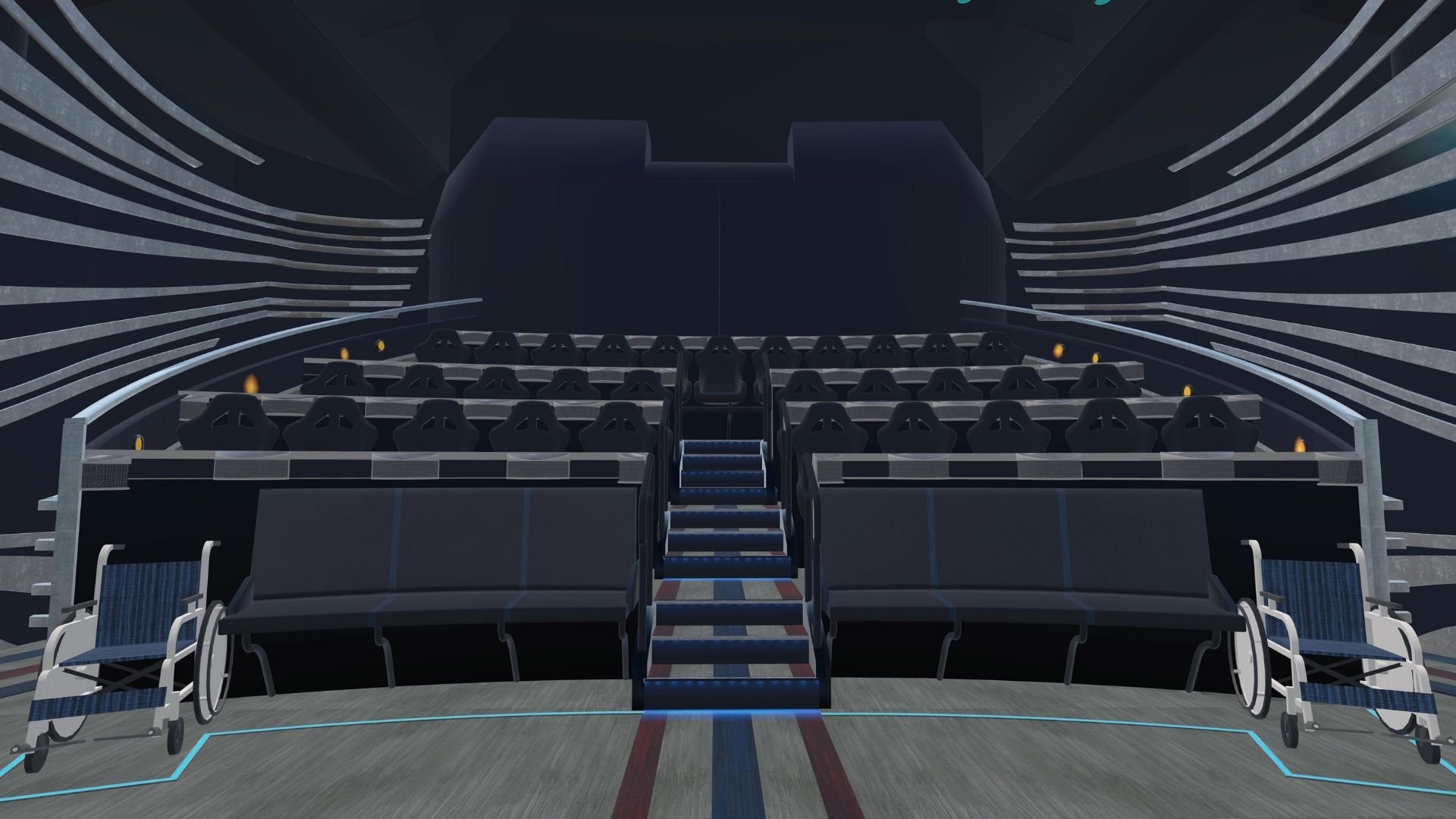 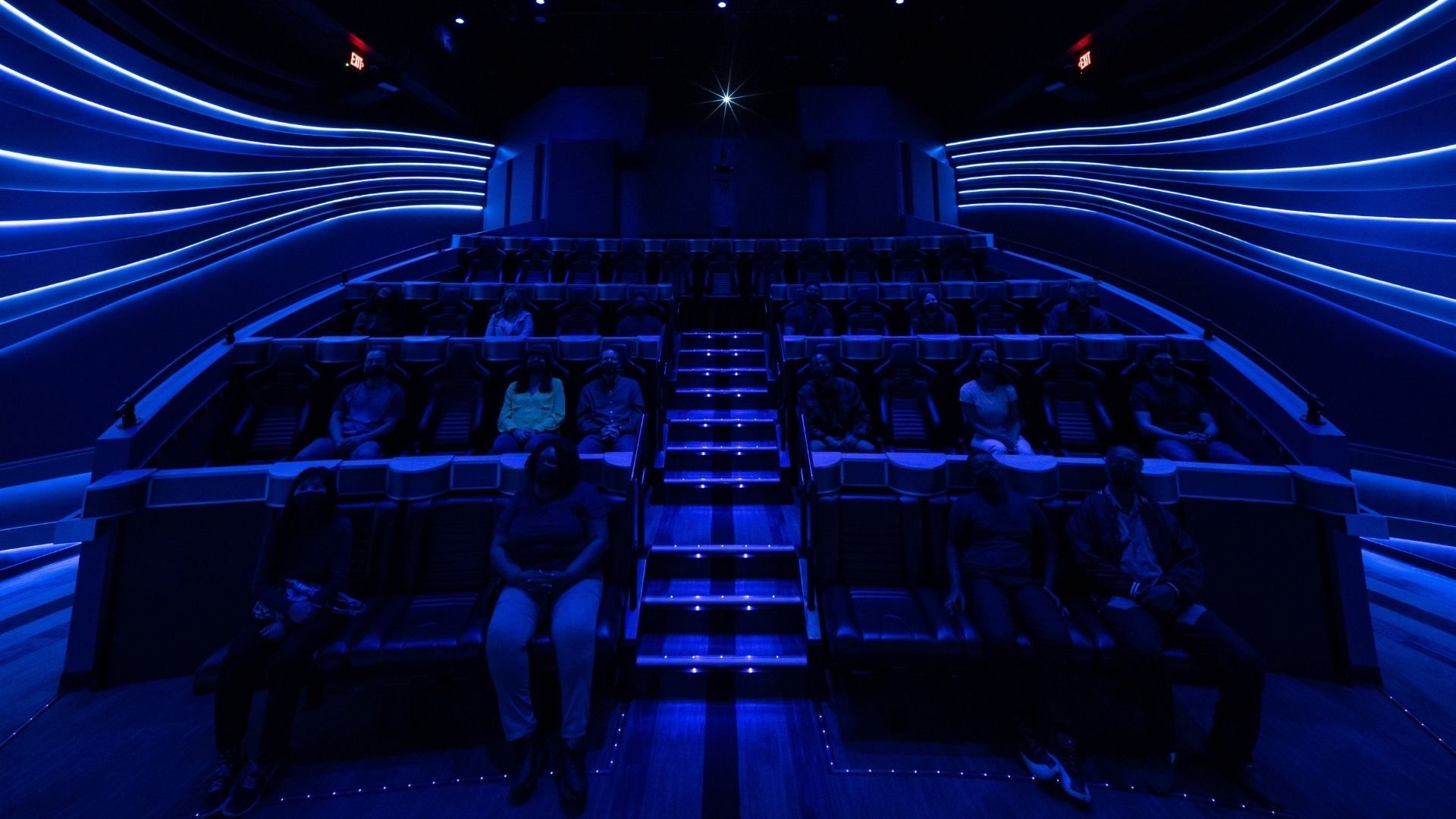 While immersive visualization was the most valuable benefit of using Prospect, some of the tools proved particularly helpful to BRC as they designed the experience. They found marking up designs in 3D as a team to be a simple but effective way to communicate their ideas. The virtual camera snapshots helped them share with the whole team. “It’s not only a camera, but a camera you can trust,” Edward said. Also, the plugins for bringing 3D models into VR made a huge difference for the BRC team.

Using VR to visualize experiences before construction in Prospect

Prospect by IrisVR helped BRC meet the central challenge of their work on the racing exhibit — a compressed timeline and the attendant necessity to streamline the review and approval process. It also helped them design both the ergonomics and the emotional feel of the one-of-a-kind sensory  experience, “Fueled by Passion.” Attendance at Henry Ford Museum of American Innovation continues to increase ahead of last year, and there has also been an increase in events booked at the museum since the racing exhibit opened.

For this team with a tough mission, VR was a crucial tool that helped ensure success. They discovered that designing an immersive brand experience must go hand in hand with design visualization in virtual reality — so much so that BRC is using Prospect on almost all of their projects today.

Read more about The Making of “Fueled By Passion,”: Behind the Scenes of Driven to Win

Ready to start saving time and money in your design process? Try a free 14 day trial of Prospect. 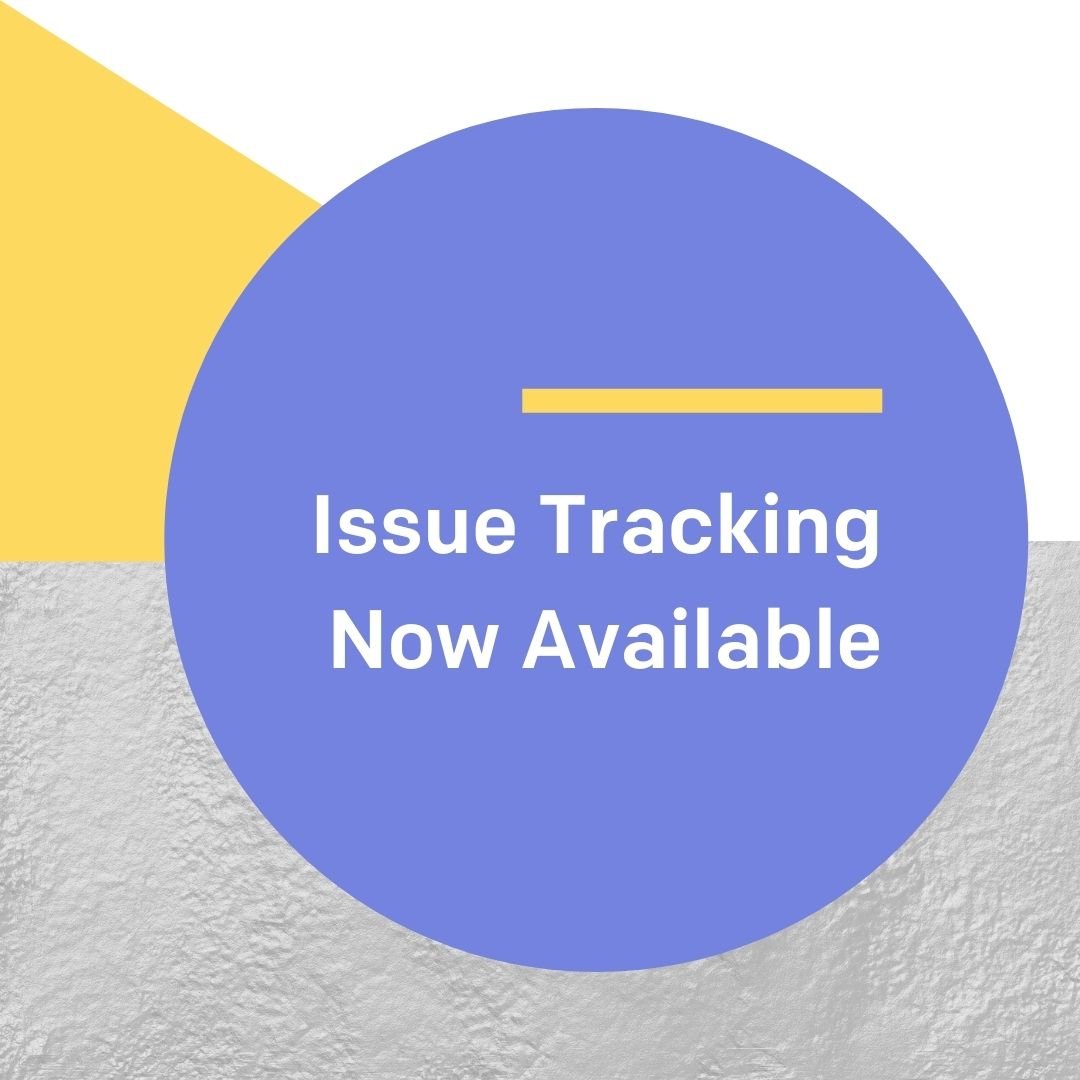